Walter Gordon was the first Black Policeman in Berkeley, California.  He was also the first Black to receive a doctorate of law from UC Berkeley’s Boalt Hall Law School.

The Gordon family moved to Riverside in 1904. 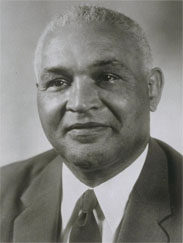 Walter Arthur Gordon was born in Atlanta, GA in 1894.  When he was 10 years old his family moved to Riverside, where he graduated from high school.  His father was a Pullman Porter and moved his family to California, like many Negroes at that time, looking for better opportunity.

Walter’s father greatly influenced him.  Those who knew Walter said he was always quoting his father.  When they came to Riverside and he and his brother went to school their father told them, “Now listen, you’re going to a school where there are whites and Negroes, and I don’t want either of you to come home crying to me, telling me that you”re not getting a square deal on account of your color.”

In 1914 Walter entered the University of California, Berkeley.  During his undergraduate years his scholarship was considerably about average.  He was active in campus affairs.  For example, he co-founded and was a charter member of the Alpha Phi Alphi fraternity on campus, which is still alive today.  He was an intercollegiate wrestler and boxer, winning the state championship in both.  He played football with coach Andy Smith’s early teams, playing every position except center.  In 1918, his senior year, Walter Camp selected him as All-American, Berkeley’s first.

The 10 years after he graduated were unbelievably busy for my great-grandfather.  Andy Smith chose him to be an assistant football coach, a position that he held for 24 years under four different head coaches.  He was also chief scout for many of the great Cal football teams, one team in particular, the group labeled “the Wonder Team”-a team that went undefeated one yer, thoroughly dominating its opponents en route to a Rose Bowl victory over Ohio State.

August Vollmer, Berkeley’s Chief of Police at the time, invited him to join the police department, where he became the first Negro officer.  He served on a full-time basis for 10 years.  In addition to that he enrolled in Boalt Hall School of Law in 1921.

I remember a time schedule that my great-grandmother used to show me which described his daily schedule.  He barely had enough time to sleep, let alone study.  In 1920, he married Elizabeth Fisher and they eventually had two sons and a daughter.  One of the sons, Walter Gordon, Jr., is my grandfather.

In 1923 Walter Sr, began a new career.  After graduating from Boalt he passed the California Bar and began private practice from an office above the Wells Fargo building at the corner of University and San Pablo in west Berkeley.  Walter Gordon was also President of the Alameda County NAACP from 1923 to 1933.  During a 10-day period he recruited 500 new members.

Walter Gordon continued his private practice until 1944.  During that time and after he did a number of things.  He continued his coaching and scouting work.  He was a member of the executive board of the  Oakland YMCA.  He was vice-president of the Lawyer’s Guild of San Francisco and a member of the Commonwealth Club of California.

In 1943 California Gov. Earl Warren, a longtime firend, named Walter Gordon to the Board of Prison Terms, on which he served until the adoption of the then new California Adult Authority.

Then, in 1955,  President Eisenhower appointed him governor of the Virgin Islands, a position he held for three years.  In 1958, he was named U.S. District Judge for the Virgin Islands, and he served on that court until his retirement in 1969 when he returned to Berkeley.

In 1991, The Walter Gordon Memorial Fund was established at Boalt Hall for summer internships.