“His groundbreaking history with Pepsi and the powerful lasting impact that Ed made on both our company and our nation speak for themselves.  When I reflect upon people who have made a profound difference on our company, Ed Boyd’s name will be foremost among them.” 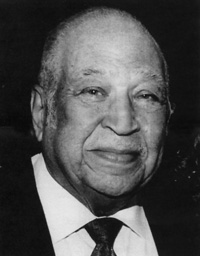 Ed Boyd attended UCLA, majoring in International Relations and Public and Personnel Administration.  He had hoped to pursue a career in International Relations, but faced with the segregation of the time he felt his opportunities to become a diplomat were limited.  As a classically trained vocalist, after college he got jobs singing on recordings for Hollywood films and played bit parts.  Because of his film roles he was elected to the Screen Actors Guild where he worked with many of the stars of the day.

From 1942-1945 he worked in the federal war housing programs in California, ending up in the number two position at the Civil Service Commission in San Francisco-the first black professional to by hired by the city. 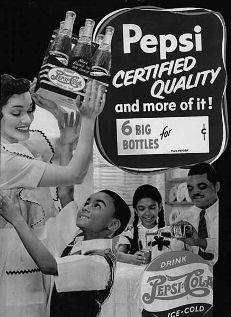 The historic campaign Riverside native Edward Boyd commissioned for Pepsi-Cola in the 1940s. Young boy in the photo is Ron Brown, who later became U.S. Secretary of Commerce.

In 1945 he moved to New York to work as a housing specialist on the Community Relations Project of the National Urban League.  It was there he met Walter S. Mack, President of the Pepsi Cola Company, who hired him to create and lead the first ever all black sales team in American Business.  During his tenure, Mr. Boyd’s work resulted in integrating the professional ranks of a large American Corporation; helping to change the image of African Americans; the development of “niche” or target marketing, and hiring some of the first professional black models.

After leaving Pepsi he worked in a number of positions.  Mr. Boyd worked as Mission Chief for CARE, the international aid agency, with responsibility for setting up an office in Cairo to provide aid to Egyptians and Palestinians in need.  He also worked for Wyeth International, where he helped the company establish a foothold in Africa.  In the 1970s, he worked in Washington, and later set up his own market research consultancy there, Resources Management Ltd.

At age 80 he started an alpaca ranch at his farm and second home in Bethel, New York, traveling to Peru, Boliva, Argentina, and Chile to acquire animals.  He retired in 1981 to his home on Manhattan’s Upper West Side.

He was a visionary man, old fashioned, and filled with a love of life.  As he was fond of saying “I’m going to live until I die.”