I am the fourth child of Starling James and Laura Redgray Hopkins born April 3, 1938.  My entry into the world was a my Grandmother Hopkins’  home at 2726 12th Street.  I do not remember living there as my parents moved to 3724 McCray Street when I was 8 months old.  I have three brothers, Lewis Bustos, Starling James (SJ), and Leonard Hopkins who were teenagers when I was born and who left home at the time I entered Palm Elementary School.

My father did not have a formal education.  His father believed when a boy turned 8 years old, he was a man and needed to earn a man’s living, therefore my father had to “self” educate himself.  He worked at the Mission Inn earning 35 cents an hour before we moved to McCray Street.  People tried to prevent him from buying the home including the property next door; but he persevered.  My father worked two jobs as a janitor in the Mission Inn, The Employment Office (night) and later the Riverside County Courthouse.  Each year he would plant a large garden on the lot next to our home and care for the peach trees next to the chicken coop.

My mother did not work outside the home.  She raised chickens, dressed and prepared them for the freezer.  My life as child was carefree with no responsibility (chores).  My mother did everything for me. I remember when I was 14 years old telling my parents that I wanted to learn to clean the house and cook.  Mom was not happy with that idea but eventually I was allowed to do this.

Our neighborhood was comprised of several families.  The Albert Gordons, Andersons, Milton and Mary Henson, David Stokes, James, Richard and Lula Wiley, Stricklands, Barnett and Jean Grier,   Andrew Lawe and Mrs. Wiley Gordon.  We were close-knit community and all of the kids played together.  There was Judy Gordon, Eleanor Grier, Barnett Grier, Jack Stokes, Walter Anderson, Jimmy Anderson and Dickie Wiley.  Later, there was Alex Torres (Lawe), his sisters Adeline and Eleanor Lawe.  Judy and I played together because the boys did not always want to play with us.  Jack Stokes was older than us and at times controlled our thinking.  I remember he convinced us there was a witch’s house behind Palm Elementary.  To truly convince us he cut one of his shoes and told us the witch did it.  We believed it. 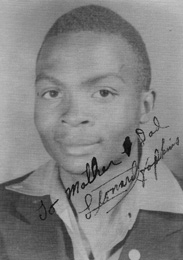 Pepper trees lined our street and on the trees was a type of bread looking substance which we called “devil Bread”.  We would tease each other when things did not go our way and say the “devil” will make you eat that bread.

I taught myself to skate on ball bearing skates.  When our skates were old and almost worn out, Jack would make them into scooters for us and we would race on the sidewalk.  Once, I was suppose to be inside helping my mother set the table for dinner.  But instead, I decided to join the race.  My scooter stuck on a red pepper berry and flipped over.  I landed on the cement.  The fall resulted in a “hairline” fracture of my left wrist.  TROUBLE!  I am left-handed.  I had to lean to eat with my right hand.  You see, I did not miss many meals as a child!

My parents were very active in the Masonic Order and traveled to different cities in California which enabled me to meet many kids.

I could always count on my Aunt Hattie and Aunt Laura Belle having macaroni and cheese on Sunday at their homes when I visited them.  Sometimes I would stay at my Aunt Fannie Allen’s home.  I liked that because I was allowed to go to the movie on Sunday with her daughter, Colombe, who was like the sister I never had.  I spent the summer in Santa Monica with my Godparents Richard and Carrie Dumas.  They were devout African Methodist Episcopalians who did not allow me to play outside on Sunday with the neighborhood children.

My maternal Grandfather, Lewis Redgray was an AME minister who lived in Pasadena.  Whenever he visited, he would bring fresh rabbit for my mother to cook.  She was an excellent cook.  When he said the blessing it would be so long, often the food would be cold when he finished.

My brother Leonard often had to babysit me when my parents attend Lodge meetings.  Sometimes he locked me in the closet because he knew I was afraid of the dark.  When I was a baby, he would push me in my buggy over the mounds across the street from us trying his best to knock me out the buggy.  I would just laugh and laugh until he stopped.

I attended a “White” school because we lived in the district and my parents felt this was best for me.  I hated it!  I was called all kind of names (“N” word etc.).  I went from Palm Elementary School to Central Junior High.  My mother fought with Palm to allow me to join the Brownies and Girl Scouts.  At Central Junior High, I was the only “Black” student in the entire school.  One time when I finished Physical Education, I took my shower as required and got my hair wet….need I say more?

My first trip away from home was to visit my brother SJ and his family in Kansas City, Missouri at age 15.  I had so much fun I wanted to attend high school there…but Mom and Daddy wanted me home.  At Poly High, I was active in sports and held a “token” office on the Girl’s League Board.  Why token?  It was an office set aside for a “Negro” girl.  At Riverside City College I was a member of the girls drill team (own merit).