The Truth Must Be Told

“I fought all my life to bring about change, to correct the injustices and the inequities in the system.”    Spoken by Ethel Payne, First Lady of the Black Press

On September 4, 2006, an article about John Sotelo, Riverside’s first Latino City Councilman (elected in 1963) was published in the Riverside Press Enterprise.  The article neglected to mention the role the Black community played in Mr. Sotelo being elected to office.

The Whole Story by Alice Key 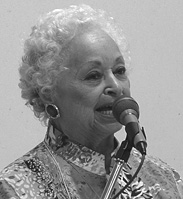 The September 4, 2006 story which appeared in the Riverside Press Enterprise about John Sotelo, former Riverside Latino city councilman illustrates why Blacks in American cities are forming their own Historical Societies.

Obviously, reporter Doug Haberman received the information reported from Sotelo, so to his credit and for his readers knowledge, we are able and willing to report how Councilman John Sotelo got elected to Riverside’s all-white city council.

For too long, Riverside blacks were unhappy and annoyed at not having true representation on the city council.  It reached a boiling point when blacks in the city of Riverside decided to take action.  Several professors at the University of California at Riverside who were white, caring members of the Unitarian Church (also white), and the late Jesse Carlos, a Mexican-American businessman joined the group of blacks to remedy an intolerable situation.

It was decided that first it would be helpful to institute a ward system in the city and it was the action of ths group that brought about the ward system now existent in the city, two years before the fateful election.

Mr. Carlos, who was the proprietor of a market and a liquor store diagonally across the street from each other at the corner f 14th and Howard streets, reluctantly declined, stating that to give the job the time it deserved would mean neglecting his own business.  It was Mr. Carlos who suggested that John Sotelo, who owned his mechanic business, might be amenable to the offer of representing Ward II in the council.

Many in the group had become Deputy Registrars and had begun to register as many eligible Mexican -Americans and unregistered blacks as possible.

Sotelo was hesitant to the offer at first, not certain of his ability, but he was assured by the group that he would have it’s total support including a weekly discussion of the issues on the council’s agenda if and when he was elected.

Election Day was memorable.  Members of the group had kept lists of everyone registered and volunteered to go door-to-door to transport blacks and Mexican-Americans to the polls.

It was a tremendous victory for minorities in Riverside and it was solely through the blacks of Riverside and their unified and committed effort that John Sotelo was elected to Riverside’s City Council.