“We must always remember that we honor our highest ideals by honoring the men and women who have sacrificed for those ideals.”

His sacrifice was beyond measure. 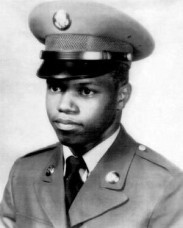 I would like to share with all my family and friends a most rewarding experience I had on Friday, August 15, 2008. I was invited to a Reunion of The Viet Nam Veterans 5th Infantry Division…which was the same division my (our) brother Robbie was a part of. I didn’t know what to expect…I was just told that since I was in Florida they wanted to make Robbie a part of the Florida Vets they wanted to honor.

The event was held in Orlando, Fl. about 75 miles from Tampa. It was held at the Viet Nam War Museum about 45 minutes from downtown Orlando. I was late because we got lost (my daughter Robyn and I)…but Denis (the Vet who invited me) kept calling and asking how long would it be before I got there. The service was to start at 10:00 a.m. and we didn’t get there until 10:30. (Robyn said it’s always an adventure going places with me!).

To my surprise they held the service up for me and when I arrived I was ushered to the front seat…I was considered the “Guest of Honor” and was presented with a bouquet of flowers.” It brings tears to my eyes even writing this. The love I was shown yesterday on behalf of “Robbie” was so touching, I really don’t have words to express it. So many came up and hugged me and thanked me for Robbie’s sacrifice and talk of how special he was even though they did not know him. It was also amazing to me to talk to Veterans who were in Viet Nam the same time he was.

The reunion continue that evening at the Royal Plaza Hotel (Right next to Disney World). with a Dinner.

There were many distinguished speakers there.  They acknowledged me and gave me a “standing ovation” for being among them. I like to say I felt like a “rock star”, but in reality I was so touched and humbled to think that after 42 years…Robbie is still being remembered!