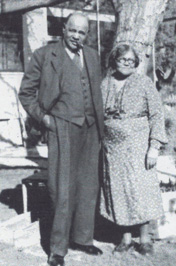 On his brother’s advice, Henry Bradley Gordon came out to Riverside, from Atlanta to see if this would be a nice place to bring his family.  The population of Riverside was about 20,000 at that time.  Henry like what he observed and established a homestead for his family.

In 1904, he went home to Atlanta, packed all his belongings, gathered his wife, Georgia (Bryant); two sons, Walter and George, his mother Sarah (his father, James, had died), his sisters Elizabeth and Mary.  He worked as a doorman at a local theater and did janitorial work in office building downtown.  Henry’s brothers, Hugh, Charles and Sterling soon followed Henry to Riverside.  Uncle Dawson was the brother that advised Henry to “go west”.  Dawson  preceded all his siblings to Riverside and he had pastored a church there.  Dawson eventually moved to Los Angeles where he got a call at the Tabernacle Church.

“Big Dad” as Henry was affectionately called was a large man about 6′ 3″ and 235 lbs.  He only had an elementary education, but he was very intelligent and industrious individual.

In talking with his granddaughter, Anita Gordon Conerly, she is uncertain how Big Dad became a police officer.  He may have worked with the mayor of Riverside.  He was the first Negro police officer in the City of Riverside.  As an officer, he worked the swing shift and would patrol most of the Negro section of Riverside and the majority of Casa Blanca.  Casa Blanca had a large population of Mexican families.  As Big Dad would patrol these areas he became known as “Mayor of Dark Town”.  Some of the young people nicknamed him “Chief Beaver”.  In the evenings, when it was near dusk, he would always clear the kids out from Lincoln Park.  Sometimes he would drive them home.  He served as a police officer for about 25 years.

Georgia, Big Dad’s wife was a tailor.  She did her work at home.  Big Dad’s mom, Sarah lived in a little house out back.  The city bought Big Dad’s property and made it a part of Lincoln Park.  The family then moved to a house on Victoria and 9th Street.

Around 1938, Big Dad became ill and was eventually confined to bed.  Grandma took care of him at home for several years.  He died at home in 1945.

Big Dad was one of nine children born to James and Sarah Gordon on a plantation in Georgia.  His siblings were John, Sterling, Charles, Hugh, Dawson and Adolphus (twins), Nora Mary and Sarah Elizabeth.  Big Dad’s brother Dawson was the only boy who went to college, Atlanta Baptist College.  The girls, Nora Mary and Elizabeth all graduated from Spelman Seminary in Georgia and worked as teachers.  Nora eventually went on a mission to Africa.  John died at a young age.  Uncles Adolphus and Hugh eventually moved to Los Angeles,  Hugh opened a bookstore in Pasadena (at Garfield and Orange Grove) and sold books by Negro authors.  After Hugh died, his partner moved the bookstore to Los Angeles (at Vernon and Central).

Big Dad’s granddaughter, Anita Conerly reminisces about the good times they would have in Riverside as children.  Grandma kept a vegetable garden out back with tomatoes, corn, string beans and lima beans among other vegetables.  Water was stored outside in a crock pot that was wrapped in a wet gunny sack then placed in a cupboard under the walnut tree to keep the water cold.  The outhouse was attached to the house and had an outside door.  There were three houses on the property.  Big Dad and Grandma lived in the main house and Grandma would do her sewing in the second house until her mother (Grandma Bryant) came to live there.  The third house was rented out.  Uncle Charles owned a sweet shop/parlor where they would sell candy and serve fountain beverages.

Big Dad owned a big black Packard.  It had two extra seats in the back.  Sometimes, we’d get a big treat like hamburgers and ice cold A&W Rootbeer.  Big Dad would buy lots of watermelons.  Sometimes there was hardly room enough for the watermelons and us kids.