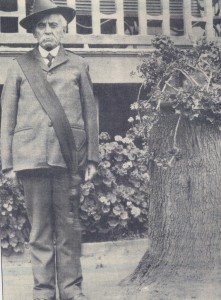 Edward Williams, a Confederate soldier’s servant, a worker for the Union forces, a member of a Negro Unit sent to Cuba for actual combat in 1898 and patriarch of the Williams family, was born on May 29, 1840 in Rome, Georgia.  Shortly after his birth his entire family (mother, brothers and sister) were sold to a family in Rossville, Georgia.  There he was raised a household servant and became the valet to a young master who he served until the death of the young man from wounds received in a Civil War skirmish near Savannah, Georgia.

One moonlit night Edward had an opportunity to flee from the Southerners.  He crawled through the briars to the Union lines and joined the Northern forces where he did similar servant duty.  He said that the Northerners treated him meaner than the Confederates.

Twice he saw Abraham Lincoln, and the dominant impression that Edward retained of the Great Emancipator was “He was the tallest and thinnest man I ever saw”.  He also said, “Lincoln looked old, older than he really was.  But that was probably because of his worry over the war”. Edward also remembered seeing General U.S. Grant and Robert E. Lee.  He recalled being with the Union Detachment which arrested Jefferson Davis, president of the Confederacy.

Edward came to Riverside in the early 1890′s accompanied by his youngest son, Hayward.  He came to visit his aunt, Annie Bacon; his sister, Janie Williams Stokes, and his brothers Walter, Robert, and Norman.  Hayward enjoyed California so much that he decided to remain in Riverside while his father returned home to Marietta, Georgia.  However, in 1926, Edward returned to Riverside and became a permanent resident until his death in 1946 at the age of 105.  He enjoyed sharing stories with his family about his experiences while fighting on both sides of the Civil War and the Spanish-American War.

In 1905, Edward’s son Trivel Williams moved from Marietta, Georgia to take up residence in Riverside.  Prior to settling in Riverside, he had traveled extensively throughout the South and Southwest riding freight cars and doing odd jobs.  In Riverside he met and fell in love with Susan Davenport.

Susan Paige Stovall Davenport came to Riverside in 1903.  Her Uncle Buddy Filmore Davenport, sent for Susan and her two cousins Nella and Mattie Huff.  Nella came with Susan but Mattie chose to remain in Atlanta, Georgia.  However she did come to Riverside at a later date.

Uncle Buddy sent for the girls because Susan, a teacher and graduate of Spelman Seminary, had gone to see the Governor of Georgia in protest to the treatment of some of her family by plantation owner Jim Smith.  He continued to maintain a plantation treating his workers as slaves.  Susan challenged this, meeting with the Governor she reminded him that the Emancipation Proclamation had eliminated slavery.  When word reached Jim Smith that she had gone to the governor protesting his treatment of her family, Uncle Buddy sent for her to come to California.  She never returned to her home in Atlanta, Georgia.

The Williams family was a happy loving family.  There was always family gatherings, parties, and celebrations.  The most memorable occasion was the family reunion of 1929.  When the eight children met their father’s five brothers including his identical twin Eudell.

Susan valued education and encouraged her children to go to college.  Jean, the youngest daughter attended the University of Santa Barbara during the depression.  She would often recall how her mother would send two dimes in a letter and how happy she would be to receive it because she wouldn’t have to walk to school, she could ride the bus.

Bubba, the oldest son, went to a Vocational school in Kansas.  Louise the oldest daughter graduated from Compton Junior College.  Iola, Claudia and Norman took a variety of courses at several Junior Colleges.