“Without question, Dr. and Mrs. Ligon and their Aquarian Bookshop should be in the Black Hall of Fame.” 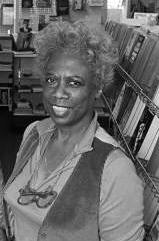 Bernice Goodwin Ligon was born October 6, 1912 in Riverside, California to Reverend and Mrs. William Goodwin.  Their union was blessed with six children:  Bernice, Bennett, Georgia, Gilbert, Elizabeth, and Hiram.  She was raised in a family where reading was very important.  One of her first employers introduced her to metaphysical studies.  “Metaphysics”,  Mrs. Ligon said, “to me, means mind over matter.  We learn how important our thoughts are.”

In 1942 she moved to Los Angeles where she met Alfred Ligon and discovered their mutual interest in esoteric studies.  A year earlier, Ligon and his sister, Jeni, opened the Aquarian Book Shop on Jefferson Boulevard in Los Angeles.  Alfred and Bernice were married in 1948.

In the mid 1950s, Mrs. Ligon was actively involved with BABY (Bureau of Adoptions of Babies and Youngsters), a community organization that assisted the government adoption agency in finding homes for African American children.

The Aquarian Book Store came to prominence in the 1960s when the community shifted from Negro to Black Consciousness.  Dr. Ligon’s classes in Black Gnostic Studies overflowed as he began to blend black history and esoteric studies while the store provided books by black authors from around the world that were not available elsewhere in the city of Los Angeles.

Many people were attracted to the store and classes because of Mrs. Ligon’s soft smile and enchanting demeanor.  She was the guide for the uninitiated.  Often students from local colleges would return to the store and find that she had prepared for them a custom booklist of suggested reading.

By 1980, the Aquarian Book Store had expanded and become the longest running black bookstore in the United States.  Sadly, it was burned down during the 1992 civil uprising.

Mrs. Ligon was the subject of a 1992 film by Erma Elza Jones, The Life of Bernice Ligon, (part of a video series underlying pioneering women, produced by the Los Angeles City Commission on the Status of Women, Los Angeles City Council and the Women’s Steering Committee of the Directors Guild of America).

She was awarded an honorary doctorate of Humanities from the Inner Circle University of Los Angeles, and in 1992 she received a citation from the City of Los Angeles “for raising the consciousness through literature.”