“We must forever conduct our struggle on the high plane of dignity and discipline.” 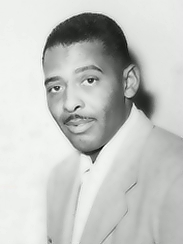 In the early 1940′s, defacto segregation and discrimination were very much in evidence in Riverside.  Elemenary Schools, churches, recreational facilities, etc., were segregated.  Restrictive covenants existed in housing, and there was inequity or unfairness in the workplace.  Eating places, also, discriminated against Americans of African descent.

To such an environment, during World War II, William H. (Bill) Davis came to Riverside.  He was in the military with the 2017th unit of the Army Air Force, stationed at March Field.  During this time he met and later married Mylie Margret Taylor.  After the war, they became parents to four sons, Howard, Melvin, Michael and Alvin.  Bill served his country for two years in the South Pacific, only to return home to suffer the indignity of job discrimination in Riverside.

He joined the NAACP and later followed such civil rights warriors as Rev. Frank Johnson, Mr Omar Stratton, Stanley Y. Beverley, and Rev. L.B. Moss,  as president of the local branch.  This was in the 1950s when the real push for Civil Rights began.  There were many meetings with authorities in various areas of life in Riverside.  Slowly, but surely, things began to change.  Schools became integrated, job opportunities, other than janitorial or menial type jobs, opened up.  Restrictive covenants were done away with,  And, eating places became open to anyone.

In the request for respectability and equal opportunity we have stood, and are still standing, on the shoulders of noble and courageous men who pledged and gave their all for “the dignity of mankind.”