”…A remarkable woman who only comes along once in a lifetime.  You have blessed us all with your determination, caring and ability to love, always love.” 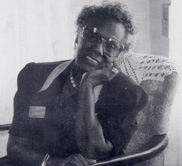 In 1933 when Eddie Dee was 21 years old, she moved to Riverside from Oakland, California.  Five years later she moved to Rubidoux.   Her lifetime of volunteer work began in 1942.   During World War II, she became a hostess at a service club and a post exchange clerk at Camp Hahn.  She transferred to March Air Force Base and later managed the Officers Club.  She was active in the West Riverside Civil Defense and the U.S.O.

Her volunteer work with the Red Cross extended for more than 39 years.  She was trained to be a motor service driver, which included changing tires and minor mechanical repairs.  She routinely drove patients to the Los Angeles, Corona and San Diego naval hospitals for treatment.  In 1950, she joined the Board of the Red Cross, and that same year received their award of Merit.

In 1952, Eddie Dee married Roland Smith, the perfect partner – tall, handsome and just as committed as she was to helping the children of their community as those in need.  “He was old-fashioned in a lot of ways.  He taught the children to be honest, work hard and never forget the Lord,” she says.  Roland died in 1974 and Eddie Never remarried.

In the late 1950′s she was asked to become a member of the Democratic Central Committee representing her supervisorial district.  She won her election and began work for Governor Pat Brown’s campaign.  She ran registration drives and became a deputy registrar.  Her campaigns included Congressman John Tunney, Congressman D.S. Saund, State Senator Bob Presley, and U.S. Senator Edward Kennedy.

In 1975, she began her work with the Senior Citizens of her community.  She worked for a time as a field representative of the Riverside City Parks Department, then with the Office of Aging and later with Riverside City College’s God Card program to extend services to older citizens.

Between her years of service to over 20 organizations, Eddie Dee managed to run a successful catering and housecleaning business.   In 1992, the Jurupa Chamber of Commerce honored Eddie Dee Smith by naming her Citizen of the Year.

Excerpts from the August 15, 1995 program: “The Dedication of the Eddie Dee Smith Senior Community Center”