“Something most people didn’t know about my Dad is that he was an accomplished artist.  He loved to paint and also loved photography.  He had a collection of his art displayed at the Museum of Modern Art in New York.”

A kind man with a loving, caring spirit. 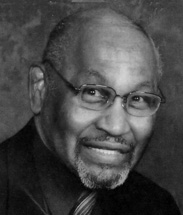 Herman W. Carpenter Sr. was born in Camden, New Jersey.  He was an only child, raised by his mother Lena, grandmother Irene and great-grandfather.  Herman excelled academically as well as in track and football.  He was awarded a full scholarship to Maryland State College and earned his B.A. from Chapman College.  On June 2, 1954, he married Beatrice (Bea) Thornton in Glassboro, New Jersey.  After the wedding, the couple moved to Riverside, where Herman was stationed at March AFB.  In the following years, Herman took in seven of Bea’s eight siblings as they slowly migrated from New Jersey to California.

After serving six years in the Air Force, Herman was honorably discharged in 1960.  That year he joined the Riverside County Sheriff’s Department, becoming the 2nd African American to be hired as a sworn Deputy Sheriff in Riverside and the 1st African American to be promoted to Investigator.  After a 20 year career with the Sheriff’s Department, Herman retired at the rank of Lieutenant.    He then worked as a supervisor for the San Bernardino County Probation Department, Juvenile Hall, where he also served on the Spiritual Concerns Committee.  After 13 years, he retired from Probation and became a licensed realtor.

Herman Carpenter Sr. was an active member of Park Avenue Missionary Baptist Church, serving on the Layman Committee and establishing many life long friends.  He was a member of the Martin Luther King Senior’s Club and the Riverside African American Historical Society.  In prior years, Herman served as a community volunteer in various capacities including Boy Scouts Commissioner and coach for the little league and junior tackle.  He was very active in sports and played semi-pro baseball.