He never let anyone deter him from his dreams. 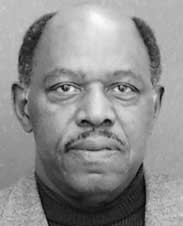 Mel Streeter was an architect and athlete, a gregarious and loyal friend, a devoted son and husband, a loving husband, a loving father and family man.  He was bornbin Riverside to the parents of Edward and  Eddie Mae (Peg) Streeter.  Their family later grew to include another boy, Herman.

Mel Streeter was a son of Riverside. As a child he cavorted in the orange groves, played basketball on dirt courts under the hot son and rose  his bike past the outskirts of town, down one lane roads that have since been paved over for subdivisions and freeways.

Mel Streeter was a skinny, shy boy who became a lean, tall muscular sports hero, a star on the powerful Riverside Poly High football and basketball teams in the late 1940s.  He was so good that UCLA coach John Wooden recruited him.  Instead Mel chose to head north.  He attended the University of Oregon.  He earned a degree in architecture – despite skeptics who said a black man couldn’t earn a living in that profession.

He married his soul mate, Kathleen Streeter and from this union four sons were born.  The Streeter clan moved to Seattle and Mel   focused his considerable drive on architecture.  He was a pioneer, the 2nd licensed African American architect in Seattle.  In 1967, he started his own practice, in the basement of the family home.  Over the years, his firm grew to include as many as 30 architects.  Among his firm’s buildings were federal aviation headquarters, city halls, retirement centers, schools, auditoriums, sports complexes and underground transit stops.

Mel Streeter never forgot his roots, or the lessons taught to him and his brother by their parents:  stand up for the underdog, honor your ancestry, be a servant.  Once, he was given an opportunity to ask President Clinton a question at  live town hall meeting broadcast on national television.  Mel grilled the president on his plan for improving the quality of low income housing across the country.

He as a special human being who was charismatic, friendly, humble and driven.    A man who broke barriers and then helped smooth the path for others.  A man who aimed straight, hit the target more than he missed, and when he did miss did not waiver – he simply prepared himself to aim once more.