“One of the highly avoided black contenders of the day.  Clisby was a scrappy fighter who gave Tony Galento the worst beating of his career.”

The Clisby family lived in a two-story house on the northwest corner or 10th & Eucalyptus. 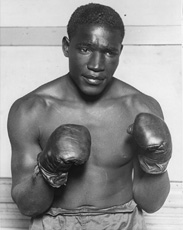 Around Riverside, Neil Clisby (Cornelius Neil Clisby) was known to be friendly, warm and extremely playful.  However in the boxing ring, it was a quite different matter.