Mr. Stratton and Pastor Dennis Black designed and helped build the First Adventist Church on the corner of Eleventh & High Street (Victoria) in 1939. 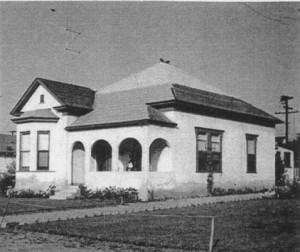 The Strattons moved to Los Angeles in 1921.  In 1923, Omar started his own successful plastering company with 15 employees.  In rural San Bernardino he built a four room cottage on their 5 acres in Valley Trust Farms which was used for vacations.  During the depression of 1929, the building and plastering industries were “wiped out” and the Stratton’s moved to Valley Truck Farms.  There he built chicken houses, and incubators, raised fryers and squabs for the Bear Market in Downtown San Bernardino.

In 1934, Mr. Omar Stratton and his family moved to Riverside.  They brought with them “Bossie” the cow, a big black wood stove, chickens and squabs.

Mrs. Stratton assisted Drs. Ralph Smith and Reynolds, nursing those who were ill in the Black Community.  Mr. Stratton was hired to teach literacy and chrol music in the old Community Settlement House on Thirteenth and Park Ave.   He taught in the evening and did odd jobs as a carpenter and plasterer during the day.

Mr. Stratton was very active in the community and was appointed Lincoln Park Director; he along with George Powell, Standly Beverley, John Allen and other organized the Riverside Chapter of the NAACP.

Posthumously, Omar Stratton was honored with the naming of the Stratton Center in Bordwell Park.