Rev. Moss was the Pastor of Park Avenue Missionary Baptist Church for 57 years. He ran for a seat on the Riverside City Council in 1946.  John Allen was his Campaign Manager.  He was defeated by only 1 vote in a runoff with E.T. Patterson. 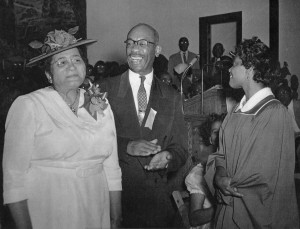 At the age of 12, Leander Bonaparte Moss was made Assistant Superintendent of the Sunday School of New Hope Baptist Church in Greenville, Texas and that same year joined the choir.

His first sermon was preached to a congregation in the Chapel of Houston College in March of 1920 and he was licensed by the church in April.  In May he was called to Pastor his first church, the Mount Moriah Baptist Church of Commerce, Texas.  In October of 1920, he was ordained.

As a concerned citizen as well as Minister of the Gospel, Rev. Moss served for sixteen years on the Library Board of Riverside County and was President of the Riverside Branch of the NAACP for 7 years. He also served as an associate member of the Republican Central Committee of the State of California.

He was a graduated of Bishop College which at the time was located in Marshall, Texas and was a Trustee of the same school.  For 2 years he studied law at the University f Kansas.

Rev. Moss touched many lives and received many citations, letters and telegrams from such people as former Presidents Nixon, Ford, and Carter as well as from many congressmen.  One of his prized possessions was the plaque given to him by former Mayor Ben Lewis on March 31, 1973 which was designated as “Moss Day” in Riverside.