Used with permission from Bartee Family

Bartee purchased the hair salon from Laura Jackson in 1946.  The location was 2665 Eleventh St.  Bartee’s favorite quote, “Honest to Goodness.”

Willie Bartee had no inkling cosmetology would be his life long vocation.  His older sister, Bernetta, introduced him to the trade.  She owned a beauty school and shop in New York City and convinced Bartee to enroll.  He graduated from the Bernetta’s Academy in 1937.  He continued to work at his sister’s shop, eventually becoming manager.  In 1942, Bartee moved to Detroit, Michigan. 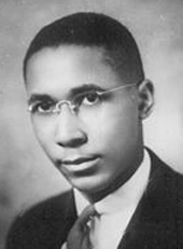 In 1943, Bartee was drafted into the Army and transferred to March Field in Riverside.  Due to a blood disorder discovered prior to being sent overseas, he spent the duration of his military as a March Field Supply Sergeant.

Right after the war, Bartee found a job at a small Riverside beauty shop called the Blue Horizon owned by Anne Perry.  That same year he enrolled in the brand new cosmetology program at Riverside City College.  Bartee was the first black student and the first male in the program.  He received his California State Cosmetology License in 1946.

After receiving his license, he began working at the Laura Jackson Beauty Salon which opened in the early 1930s.  The two person shop was located at 2665 Eleventh St. in Riverside.  When Laura Jackson became ill, Bartee took over the sop and soon after, had the opportunity to purchase the business.  In 1946 it officially became “Bartee’s Beauty Salon.”  For 60 plus years Bartee operated the business at the Eleventh St. location.  The shop closed in 2007 when Bartee retired.

Bartee’s Beauty Salon was believed to be the oldest Black owned business in the Inland Empire.

In 2006, Bartee was one of the honorees at the 6th annual Summer Breeze Hair Extravaganza highlighting Breast Cancer awareness.  The event was in recognition of those who had been in the hair business for 30 plus years.

Upon retirement in 2007, Bartee received a letter of commendation from Assemblyman Jon Benoit.

Bartee enjoyed spending time with family and friends.  He also loved sharing his memories of early Riverside and marveled at all the changes he witnessed.